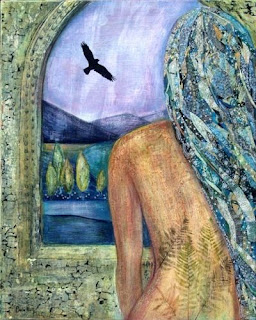 Saturday was the opening of the 4th semi-annual Word-Art show at the Gallery on the Green in Canton, CT. For the second time, I had the honor of working with my dear friend, Carla, http://anonyrrie.typepad.com/ in response to her painting, "On Ancient Wings." I only hope that my poem,"Wounded Bird," does rightful justice to Carla's mystical and magical talent.

.
The show runs through April 12, with an evening of readings on Saturday, April 4 at 7:30.
.
Wounded Bird
.
Part 1
.
A swallow can fly miles, From treetop to ocean cliff,
The wind's undertow buoyantly gliding her
To a resting place warm with possibility.

She is free, lifted higher by duty and family,
Not a thought outside of weather and wind, .
Acceptance and choice safely within her span.

But then, jolted in flight, her heart pumped deep
And she is transformed,
.
The unknown and unfamiliar
In that very moment,
A broken wing reclaiming
.
Something lost and ancient
Spiraling deep and desperate
Into the habitat of hidden.
.
Some species heal their wings
In solitude, licking and lying
In a nest of thin twigs
.
Healing from within
Until they can fly again,
To and from home.
.
But other species do not heal
And they tuck that wing
Underneath themselves,

Landlocked and less,
The natural order
Injured inside and out.
.
That species will push on
Practicing, praying, pretending
That wings are but a crutch;
.
Meanwhile hoping that reverse gravity
May rocket them up and open them wide,
Heedfully whole to fly again.

Part 2 (My Side)
.
I fly from necessity
Hovering over leafy trees and endless water,
Following an inestimable path from home
.
Only to return again,
Where I’ll find my roots and rhythm
Deeply tucked in grainy sand.

I do not question why I do this--
This destiny of family and fate--
What I cannot fathom I will not change.

My twelve feather tail and meager wing span
Weigh in below two ounces,
Not enough for my survival

And yet I maneuver and endure,
I doggedly sing my song
And tuck my broken wing

Under my expanding and rapid chest
Until I know if
I might fly again.

Reaching still and always,
Weightless in my belief
That I was born for just this moment.

Damn! I know there is a two line stanza that should be three. Blogger simply refused to let me correct it. So I bent, which is probably something I should do more often anyway... :)