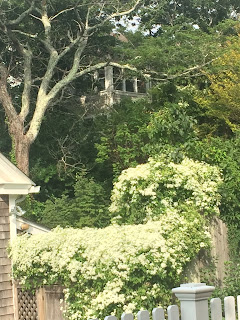 I look at this scene almost daily.  It is a view from my side yard, where JB and I sit, a block from the bay, and where I imagine what it must be like to live in a treehouse.

I haven't said much lately about the land by the sea where I now live. That's because I stepped away from the the rhythm of the ocean tides and the pink-orange colors of sunset at Herring Cove. I stepped away because of real problems but no longer.  I've still not returned--not yet--because I am consumed with finishing a novel I started writing six years ago. I am into that lovely zone of timelessness when one is doing something one loves and because of that, I have to push myself away from the manuscript. 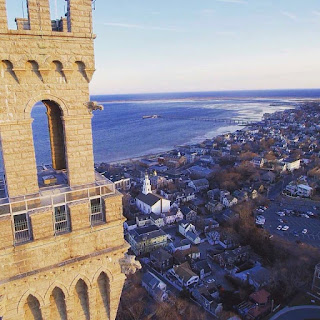 And this too: my daughter and her family have bought a lake house in Maine. They've watched the sunrise and sunsets this summer, and every night they speak about the beauty of that. Their young children  each morning walked into a back yard that is a beach, a beach yard with a hammock and kayaks and a small boat and rocks to fish from. I don't know if I've ever felt as content for my Jess as I do now And I say this after eight weeks of surety that she had cancer. (Misdiagnosed!) 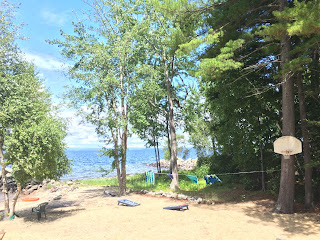 Because of that surety, in a panic I found a studio apartment near her so I could help with the kids and help my daughter when she lost her hair and became too tired to move. I had to sign a one year lease and that has turned into a blessing--the apartment is adorable and cozy and convenient. We never would have spent the money to rent it had the circumstances not been critical, but now that we have, I can be here a couple of days a week, hanging out with my grandkids, learning to play the guitar, writing, writing.

There was a sophomoric time in my life when I longed for a soho-type loft. With this place, I have it. 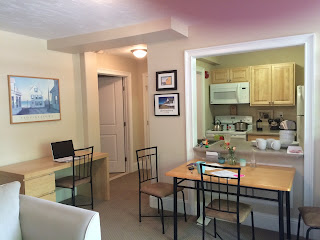 The reason I'm writing this post tonight is not for any of the reasons I've just talked about. I'm writing because I visited my 99 year old Godmother today. Our visit was about planning a party in late October for her 100th birthday.  I'd asked her for  a list of people she'd like to invite. In her best handwriting she's written out names, addresses, phone numbers, an explanation of who is who.

My Godmother is an amazing woman. She lives alone, she gardens, she feeds birds and squirrels in her driveway, she cooks and bakes, she reads the newspapers every day. Today she showed me an article on Koko the ape, his daily routine and how he mourned the loss of his pet cat.

And she told me how she remembered me as a fun little girl, how I crawled into bed with my grandmother when she was sick and how I visited my grandparents every day, evaluating if the supper menu was better than my mother's. I asked her if I had been a good kid. She said yes, yes, you were.

I am organizing this 100 year old birthday party in late October. I asked my godmother if she wanted to speak at the party and she said, 'maybe, but mostly I want people to meet each other.'

I want that too. Her family was separated when she and her sisters were orphaned so I don't know her sisters or nieces and nephews. I don't know her friends. She gave me a list of 40 names today. I expected 15. On her 100th birthday she will celebrate with all the important people in her life.

I'd say that will be a great gift.

Happy September, everyone. FYI: the optimist in me has made a comeback.
love
kj
Posted by kj at 11:34 PM 7 comments:

The Return of Me

No new photos, no extra wisdom, just a feeling that it's time I checked in here and confirmed that I am finally healthier and more grateful than not.

I'm coming off probably the hardest year, or two, of my life. My mother died, JB's been emotionally unwell, Jess had cancer before they told her it was a misdiagnosis, and my annual physical brought up more body systems with problems than any one person could even have. That last part, except for a painful and stiff back and pelvis, I'm actually alright and every day feeling more like my old self. 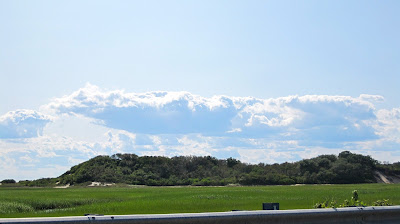 JB and I moved to this lovely ocean community just a year ago. Living here in Provincetown, at the land's end, is a dream to many, a goal for many for some day. For us, however, it's been burdensome to live somewhere so special and to have too many challenges and problems to even minimally partake and enjoy its beauty, its light, its people, its zaniness.

I think that limitation is now changing. Jess is well, JB's improved, I'm okay. This means I've been able to write again. I started my second novel about 18 months I finished my first. Never did I think six years would pass and I would not have finished this story.  It's about an American family and about devotion. Parts of it are funny.

Now I'm in a groove and if I had the time I could write 12-14 hours a day. As it is, I'm writing regularly and I'm psyched. I have a goal of a finished draft by December. Then I will search for an agent and a publisher. If no one bites, I will publish it myself.

I am not a great writer. I wish I were, but I'm not. My skills are basic and I lack technique. So I'm not going to be offering a New York Times best seller; I know that. But I care about these characters and I know not to let go of the manuscript until it reads just right to me. I know I will give it my best try and my best work and I'm satisfied with that.

Otherwise: I am also taking guitar lessons with my nine year old grandson Ryan. And his seven year old brother Drew is taking piano lessons in the next room. After the lesson the three of us walk to the corner for Asian food. This was my idea because the boys come from a sports family and I figure why not push a bit of music too, and who knows, maybe poetry after that? We've had four lessons and the three of us love the whole time together.

That's it for now. Oh more more thing: the American political situation is bad. I'm very very very hopeful that no one with orange hair gets anywhere near the White House.