Hello everyone, it's me, Emily. It has been a very busy week around here. First of all, we raised $ 435 for the Wishes & Dreams Foundation--can you believe that??? I haven't decided whether to give my $ 15 but if I do but I might not but if I do that would make $ 450. kj says we are all wonderful and this time it's really true, right?
.
Anyway, a couple of days ago Milo the Millennium Bug arrived from the Netherlands. I don't know if a bug is an animal or not but he started off in Arizona where he lives with Deborah and he is touring the world on vacation.
. 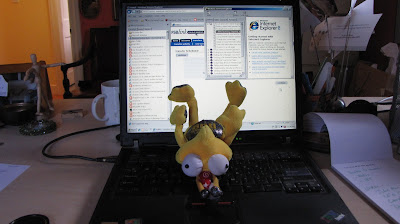 Milo was exhausted from the trip. But the worse part was that is is afraid of large dogs biting him into little tiny pieces and eating him. When he saw Stella he hid in the bathroom and stayed there for hours.
. 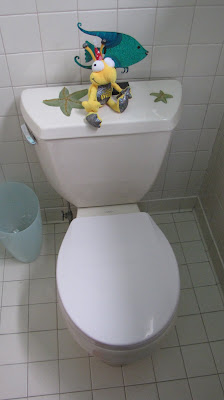 But finally Milo ventured out. Everyone was nice to him, even Stella tried . 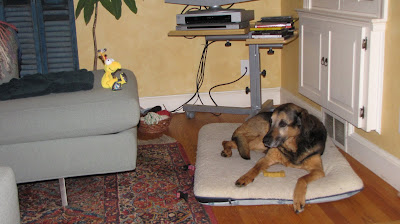 So he moved closer. 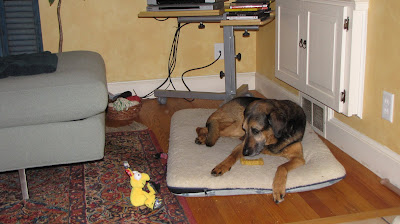 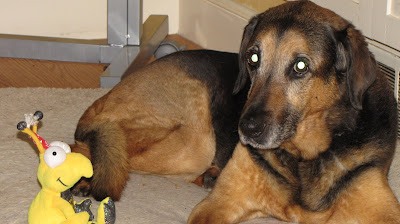 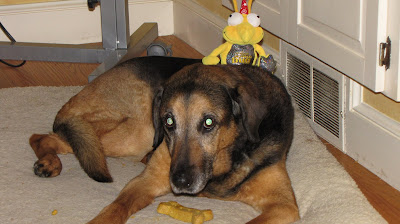 Until finally Milo and Stella shared a cookie and then fell asleep. 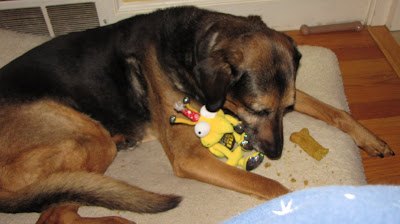 Next I am going to introduce Milo to Francine and Esther and Mildred and Angel Angel and Frank and Dolly and the rabbits and that's not all. Now that he is no longer afraid of big dogs kj will pay me an extra $ 10 if I promise not to teach Milo how to throw frozen peas at the windows or throw temper tantrums. I am still thinking about that.
.

Meanwhile Happy Thanksgiving if you are giving thanks and do you think I should take the extra ten dollars?

p.s. kj is very upset that I put up pictures that show those wires from the tv. she says she doesn't want anyone to get the impression that she has wires everywhere, because this is the only place, and only until jessie the carpenter builds a shelf for the tv up on the wall. Personally i don't care about the wires but you know how vanity can flare up sometimes with certain people, so please don't say anything about the wires and actually it would be even better if you don't see them at all so you don't even know what i'm talking about. thank you from emily.
Posted by kj at 10:35 PM