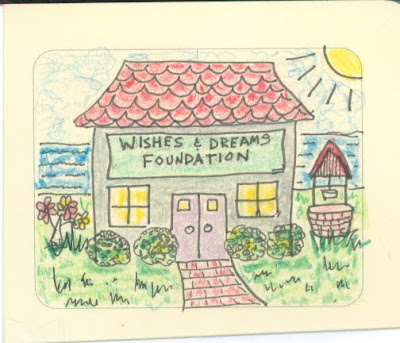 Hello everyone, it's me, Emily. This week I am in a very good mood because kj paid me $ 10 that she owed me and then I looked like an angel after Esther the witch got drunk and flew all over the house before she finally crashed into the couch and then she looked very stunned for two days after that. kj was not happy that Esther flew into lights and ate all the candy, which she probably really did do but it is not my fault that kj didn't ask me if I ate any of the Reese's peanut butter cups because if she had asked I might have said maybe I ate some but since Esther got blamed it is not up to me to volunteer information, right?
.
Anyway, this week I am going to do something very different for me and kj says I will be rewarded in many ways but even though I'm not really sure about that I've decided to do something nice anyway and then hope for the best.
.
kj started this Wishes & Dreams Foundation and she is going to collect money and nice thoughts to help somebody in some way somehow however someone wants to do it. kj came up with three ways that anyone who wants to be one of the someones can help the other someones to be happier and kj says when you do that it helps you be happier too. I don't know if that is true because I have never done it before but this one time I am going to try and then I will see if I end up with more jellybeans or chocolate pretzels or extra money or maybe even my father will come home from working at the National Institute of Health, which someday I will tell you about but not now because now I am writing about this instead.
.
For everyone who makes even a dollar contribution to this Dreams Foundation I will have a drawing to see who wins and the prize will be that I, Emily V. V. Rabbit, will be a guest writer on your blog AND I will write about whatever subject you want me to write about (except kj says no sex topics and nothing about cooking because I really don't know anything about that and really I don't think you should ask me about investing money or politics because that has not worked for me very well already plus I really don't care about either because as we all know that can be very boring; okay not the sex part but the money and politics part.
.
kj says the contributions can go to any one of three choices. One of the choices doesn't cost money at all but you have to be nice and do something nice for someone else and you can't exaggerate what you did to make yourself look better than it really was, which I have done a couple of times myself and I got in trouble both times, so my advice is don't even try.
.
1. kj has this client who is 13 years old and can't live with her mother ever because of problems, plus kj says her school is not the best but she is very smart and kj thinks it's important that she be around kids who are good role models, whatever that is, it might have to do with rolling clay but I'm not sure, but anyway, any money raised for her will go for acting lessons next summer, when she would be totally bored and sad if she did not have something good to do.
.
2. You might already know that there is this doctor named Maithri who works in Swaziland Africa and helps children who don't have mothers or fathers and need everything, even clean water. kj's friends Tessa and Renee have raised some good money already but if you want to do this instead of the acting lessons, that is fine with kj and that is fine with me.
.
3. This is the one that doesn't cost any money, but you can't cheat!! You have to do something very really nice for someone else and you have to do it without getting caught so they will never know that it was you who did it. But you have to tell me or kj what you did because kj thinks it might be a good example for other people to think about how to be secretly nice too.
.
Anyone who tells me this week that you will do anyone of these nice things, you will qualify for me to be your guest blogger. This is worth at least $ 100 if I were paid fairly even though I never am but sometimes that's okay because I do like the attention and I have met some very nice people including my best friend Marianne.
.
I would appreciate if you would help me out because I think it is a good thing to do anyway and I think kj will be impressed if I manage to raise any money or nice deeds. As an added bonus, even if you don't win the fantastic grand prize, I am willing to give anyone advice on how to have fun and not care about getting in trouble or being too polite. This is something you should learn before you get too old, anyway.
.
Oh, p.s. if you say you are going to contribute kj will contact you and tell you how to do that and then I will put your name in the Grand Drawing. I will cry very deep from my stomach if nobody helps me or wants me to be their Guest Blogger. If I do have to cry, this is how it will sound:
BOOHOOHOOBOOHOOBOOOOHOOOO
for a long time. kj says it hurts her ears.
.
Sincerely yours,
.
Emily Rabbit