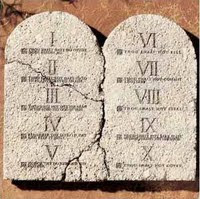 HMMPFF!.
.
Hello, it's me, Emily. I have been very good while kj bribed me last week to be nice and write about doing some nice things for other people, and I didn't stamp my feet because I had to wait while kj wrote this sad story about Andrea, who I'm sure was very nice and it sounds like she definitely knew how to have fun, which you know is my kind of person so I tried not to throw things because I had to wait too long, but this is Wednesday and it's my turn to write about the things that I think are interesting even if kj doesn't like them and really even if nobody else likes them because that is not my fault either, right?
.
Today Ms. Rhonda Roo asked me to say 10 honest things about myself, which I am happy to do anytime but I since I learned about the Ten Commandments last week in school I am going to tell Ms. Rhonda Roo and every one about them and about ME at the same time.
.
First of all, do you agree with me that it is very silly for a rabbit to learn the Ten Commandments? And I'm not just saying that because I got a "D" on the test.
.
Here we go. I hope you will learn something you like:
1. I am the Lord your God; you shall not have strange gods before me.

I don't have to worry about strange Gods because I only listen to my Mother and mostly when she tells me I am going to be punished if I am not a sweet little rabbit or if I stay out all night and lie that I am helping kj because she is sick, which I have done seven times and I have gotten caught twice. And by the way how would you even know if it was the right God at all if the God was strange? Am I the only one who noticed that?

2. You shall not take the name of the Lord your God in vain.

Like who else would want the name anyway and then feel vain about it? If your name was God Easter Bunny, that would sound very weird. Or God Obama. Or even God lololo would be odd, don't you think? So why not just be vain with your own name?

It is not my fault that I don't know when the Lord's day is. I don't even know who the Lord is. There used to be a violin player in my neighborhood named Lord Chipmunk but I don't think he had a day and if he did he never told anyone because we never did anything special, except once on his birthday my mother made him a peanut butter and pumpkin seed pie and he ate it all without sharing even one bite. That should be a commandment: don't eat all the candy without giving a piece to everyone who looks like they love the smell of it.

4. Honor your father and your mother.

I looked up honor in the dictionary and it kind of means respect and listen to. Well, I really cannot do that some of the time and being a little rabbit I don't think it would be a good thing if I did that all the time because then how would I learn to have fun and to wiggle my way into and out of good adventures? I would honestly rather see a commandment that says "Have fun most of the time" because I think you learn more than way and then you are usually in a better mood and nicer to people, which is the point, right?

Once I killed an ant and once I killed a beetle but it was not my fault that they walked in front of me and I squished them flat. And then I had them stuck to my feet and it was gross so maybe it's actually not a bad idea to have a commandment that says 'don't kill' because I don't know anyone who ever says anything good about killing anything anyway. And if anyone does tell you it's a good thing, I think you should move your seat or tell your mother because they might not see things right and then maybe they won't see you right either and you could be in trouble by then. And while we're on the subject, I do think it's alright to kill a bug by mistake, but it is never alright to kill a rabbit or any other little animal. Just because you don't see it happen, if you see a little animal on a menu, you can be sure they got killed so don't eat them. That should be the commandment: don't eat little animals and probably big animals too but I'm only taking care of myself right now, maybe later I will include big animals too.

6. You shall not commit adultery.

I have no idea what this is. I asked kj and she said that means be faithful to the person you are married to. Is that right? Well I am way too little to worry about that but I can tell you that I don't think this matters to rabbits the way it matters to people. Rabbits are known to multiply, not divide. I think that applies to love too. I heard kj say that very thing once: 'love multipies, it doesn't divide'.

HAHAHAHA! This must be a joke. Because if you can't sneak into a garden and steal a carrot or a radish, where is the joy in life???? That is all I am going to say and I think you should think about this. Plus if every one shared more maybe no one would steal.

8. You shall not bear false witness against your neighbor.

WHAAATT? Does anyone understand what this means? kj said she thinks it means don't lie or blame someone for something they didn't do, but why would you do that anyway unless you were in a real jam and you needed someone to take the blame one time for you, like when I got arrested and I told the police that it was really a seven year old girl selling the multi-colored rabbit pellets at the church meeting, not me. Okay, so she wasn't my neighbor so maybe this commandment doesn't count anyway, but maybe you should find out what 'bear false witness' means and then you can see if you should do it or not.

9.You shall not covet your neighbor's wife.

I don't understand this one either. At first I thought 'covet' meant put a blanket over some one's head but why would you want to do that anyway unless you were playing with each other and if you were playing what would be wrong with that, right? But kj said 'covet' means you want something that isn't yours but what if your neighbor doesn't care or is mean and you are nice to his wife and you want to go bowling with her or something. These commandments are too exact if you ask me because not everything is simple, even kj says that's true. But I don't care because why would I ever covet anybody's wife at my age? You should figure this out by yourself, but my advice is just be fair and nice and that takes care of almost everything.

10. You shall not covet your neighbor's goods.

I am going to hell! I covet my neighbors supply of jellybeans, chocolate covered pretzels, pogo stick, swing set, tree house, secret hole in the yard, and that's just the beginning. I have way too much fun to stop coveting, so please don't ask me to because then I would be very sad and I would cry very deep and for a long time and you would probably finally tell me to be quiet, which would make me cry more, and by then it would be obvious that I was better off quietly coveting.

P. S. Please do not tell me I am not being respectful to the Commandments because don't forget I am just a little rabbit and I don't know any better.