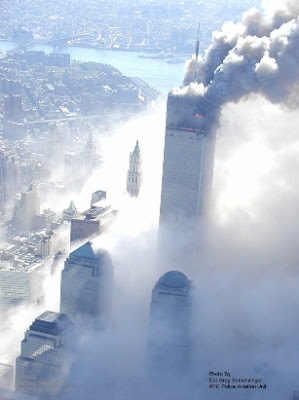 I lived in a 3 floor 13 room queen Anne Victorian duplex and the men who boarded the plane from Boston and rammed it into the first tower slept not even a mile from my house the night before.
I turned on my television and saw that plane crash into the first tower. I called my daughter Jessica at work. "Jess, something terrible just happened." I didn't know when I said that that another plane would crash into the second tower minutes later.
"I know Mom. They're calling us to the lobby to tell us what's happening. Seven of our people are on that plane to Los Angeles. They're going to tell us who."
I followed those seven people for days and weeks and months. I followed how many children they had, the messages they left their families from their cell phones, their parents trying to describe the pain. Most were barely 30 years old, except for their supervisor named Sue and later I wrote a short story about her.
There are few people in all of America and in the world who don't remember the details of the morning those planes crashed into the towers, and the U.S. pentagon and a fourth in a Pennsylvania field.
But for me living in Boston, so many Bostonians were on the first plane that crashed and disintegrated into grey matter, for me it was incredibly close to home.
This means my hairdresser lost her friend and her friend's two year old daughter and when I looked at their photos at the counter I already knew their names.
The owner of the north end shop where I was browsing started crying, talking about her best friend, and I cried with her.
I wonder if my daughter thinks it could have been her, with a slightly different decision here or there, it could have been her.
This means I know the ins and outs of the airport area these guys boarded.
This means I had muslim clients who feared for the safety of their children.
That just about everyone I know knew someone who was killed.
This means that I could not forget no matter how hard I may ever try.
All week I've found myself choking up and starting to cry at some mention on the radio or from a photograph or from someone's memory.
This means I pray for peace deeper and harder than ever.
For god sake's: that morning was horrific. Unimaginable.
What few in all the world could not grieve the loss of a child, parent, spouse, cousin, friend, neighbor, into thin air? Eye to eye, not from a faceless distance, who would see it otherwise?
9-11 is about the value of human life and the humanly wretched depths of love and hate. I know where I stand.
Thank god I know where I stand.
Love
kj
Posted by kj at 9:43 PM