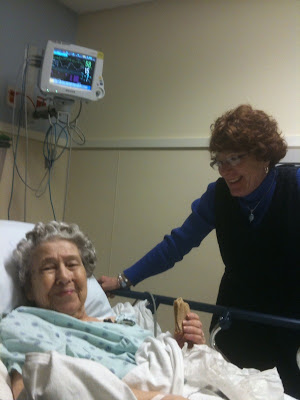 This photo is not now. She's not in the hospital; actually she spent tonight eating homemade pizza with me and 29 other residents at the rest home where she lives.

But I think this photo says so much about my Mother. She had fallen and broken her arm when this was taken, the call reached me as I pulled into my friend Mim's driveway saying that she had likely had a stroke, that she might die. I was 90 minutes away and my partner JB rushed from work to be with her in the emergency room. And there she was, smiling, asking a hundred times what happened, hearing a hundred times that she fainted, forgetting the answer a hundred times and just smiling her happy smile.

I have come to respect my Mother in ways that astonish me. "I don't complain, do I?" she asks me. When I tell her no, you don't Mom, she says, "Good, because I don't think I have anything to complain about."

She is 95 and a half years old and can't remember what happened two minutes ago. "I don't give a damn!" she says. "I still have my mind." And she does. In the present moment, my Mother is lucid and sharp and competent. I don't worry about her. She doesn't worry either.

My Mother somehow has ended up in an old fashioned rest home ten minutes from me, in her own private room with a bathroom across the hall, with a staff that quietly sets out her clothes each morning and brings her ginger ale and a cookie after dinner so they can subtly help her ready for bed, with home cooking that all thirty residents rave about, and so do JB and I when we show up for Thanksgiving dinner and have turkey and all the fixings and baked stuffed shrimp and fresh apple pie with our coffee.

But I can finally say I hope my Mother will be lucky enough to die there. In her bed. Maybe even with that look of contentment that perfectly matches her green eyes.

There is one more part of my love affair with my Mother you might be interested in. She and I did not talk to one another for almost nine years. It still surprises me to say that is ancient history. I remind her of that only rarely and she grins at me: "I must have been wrong. Who could stay mad at a daughter like you?"