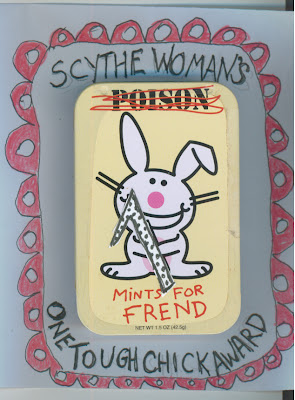 graphics for this award provided by Ms. Robin Lilac by way of kj's birthday present which was really for me. kj added the scythe and I made it polka dot because even a scythe should be designer fun, don't you think?

Hello everyone, it's me Emily Rabbit, writing today to share some very very prestigious news. As you might know I gave some very good advice on preparing for a hurricane and kj did not pay me for it and until today I have been very under-appreciated which is not fair but I try to be brave about it even though I threw frozen peas at kj while she was sleeping on the couch.

BUT!!! Wild Wonderful Wacky Anne of http://elmilagrostudio.blogspot.com/ has presented me with very first Scythe Woman's One Tough Chick Award. The recipient is tough and prepared and able to control temper tantrums at least some of the time. In Anne's words:

Emily, I want to congratulate you on being so prepared for the hurricane and sharing it with everyone else in a very interesting blog post. You proved that you were quite tough by preparing and riding things out, and by not throwing a fit when NO ONE e-mailed a thank you, but were polite in bringing it to our attention.

In the future, you have all the rights and privileges associated with being "ONE TOUGH CHICK!" like getting leather chaps and using a scythe like Scythe Woman does. (it would cut flowers faster--heck, it cuts everything faster!)

Also, since you had a safety pin in your illustration of how to fix things after the earthquake, I am assuming you're a Punk Rabbit too, so you have the right to wear a Misfits hat like mine. Only TOUGH CHICKS wear those.Now, you'll probably have to make some mischief so you can post this on KJs blog before she knows what you're up to, so I recommend running around fast throwing frozen peas and screaming and knocking things over, then hurry to the computer while everything gets cleaned up.

It is always nice to be so understood.

So in honor of my award I am going to award this award out to certain spunky, brave, competent and maybe even patient people. They don't have to be women, even Mr. Snowbrush and silly Walking Man can be included.

Tell me who you think deserves the One Tough Chick Award and explain why. I will then bestow this very wonderful honor to that person or persons. Later you can give the award to anyone yourself but since I'm the first to get it, I want to give it out myself first so please cooperate.

If you are wondering why this is a One Tough Chick Award and not a One Clever Rabbit Award, you will have to ask Anne but personally I think you should just accept her decision because she knows what she is talking about and really she is one tough chick not one clever rabbit so that may have something to do with it.