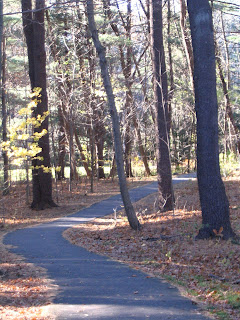 "When sacred life is in your hands, it seems like it's always been there. But when it slips through your fingers, it's so easy to forget that it was ever there. And that absence becomes your life. The resigned life, the distracted life. The life in which you do not deserve happiness and love, and you were foolish to believe you did. You are too fat, to far behind the winners to catch up. And there are so many others like you, that you settle in, validated in your resignation."
.
My friend Bill wrote this. He wrote it because he was this close to falling in love with a wonderful very cool and hip woman who may have been very close to falling in love with him, except she died two days after they acknowledged their feelings for one another.
.
A few days ago I went to the doctor to check my cholesterol, since the diet I'm on is all about meat and cheese and nuts and eggs. He asked me how everything was going and I started crying. Right there sitting on the exam table. It snuck up on me, came out before I even knew it was going to. He asked was I sleeping?, am I lethargic?, how is my appetite? All okay, I told him. So what’s going on? he asked. It’s grief, I said, it's just grief. .
He looked at me kindly. Oh, he said, that takes time.
.
Time is my treatment plan.
.
Bill and I have talked about grief, more about his, less about mine. That is because I can hardly put words to mine: I didn't lose someone to death. The details don’t matter at this point and I can’t explain them anyway: essentially I lost a friend, but even using the word “friend” is oddly insufficient. Best friend, that’s closer, but still not full enough. In my mind we were "sames." The tradition of sames began in China centuries ago: two girls bonded in childhood, by familial tradition and agreement, committed to love one another and assure each other’s welfare until one of them died. That is how I felt about the two of us, how I still feel when I find it impossible to understand how the hell we landed where we could no longer right what was not right.
.
I used to think of grief as your fiancée leaving you or your brother killed in a car accident, or from nowhere your child has a brain tumor. I’ve followed the look on Bill’s face and sometimes I see resigned confusion, as though he’s put his hand in a bag of golddust but it’s all slipped through his fingers by the time his hand reaches the rim. So close, his expression seems to say, so close I almost deserved it. Or did I? It's a good question: how would he know? What would have been if fate had not stepped in at the moment that destiny and possibility intersected, a deadly crash with no chance of resurrection?
.
The look on Bill’s face is grief. Not always, because he has to live, afterall. Just like I do. But I know the look. I think grief gets harder as you age: you start to understand that you are dealing with not simply the loss of a person, but the loss of two.
.
You lose somebody you love, cared about, and shared the littlest things: a special card, planning a vacation, talking past midnight, watching a sunset and thinking how much the other person might appreciate it too. But in a real way you also lose yourself—at least that part of yourself that allowed a certain tenderness, that hoped and danced with the anticipation of trying comfort on for size, wearing it like the sweater you’ll never give up, even when it frays and unravels.
.
That’s what grief is. You hold on because you’ll lose some part of yourself if you let go. And you’re afraid you won’t have it again. And you hold on because you know those tender feelings may well remain in the present tense, live as long as you do, because they are and will stay a part of you. There is some beauty in that, I think, but you need time before grief brings healing, before you understand that love doesn't really go anywhere anyway.
.
The risk of love is loss, and the price of loss is grief, but the pain of grief is only a shadow when compared with the pain of never risking love. Hilary Stanton Zunin
.
I'd say that's about right. And I'm pretty sure Bill agrees.
Posted by kj at 9:00 PM