Animal Wednesday: Emily Rabbit & the Power of the Purr 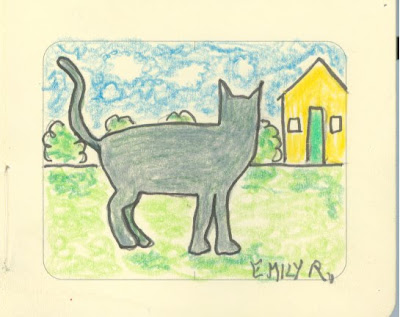 This is Uncle Kitty. He has a little rip in his left ear because he gets in fights but not because he starts them. He lives behind the Magic Cottage in kj's yard and when he visits sometimes he rushes by and sometimes he stays awhile but no matter what he purrs and JB always relaxes when he does and she might give him milk and little pieces of tuna fish but sometimes she doesn't give him anything because she is already in bed and the purrrrr puts her to sleep.
.
A lot of times Uncle Kitty, who is related to Mr. Kitty but I don't know exactly how, shows up late at night and purrs. If you think this sounds weird I agree with you but I have never said that to JB because why tell someone they are weird if what they are doing relaxes them and then they are more likely to be nice to you and maybe even take you shopping?
.
So anyway, did you know that purring is very healthy? How many cats do you know with orthopedic problems? They usually don't have problems with their hips or ligaments or bone cancer and they don't have arthritis like Stella does and even kj does but of course I don't because I am too young but still, most animals and people get stiff but cats don't.
.
If you are wondering why I am telling you this, it's because this scientist studied something called bioacoustics which is about animal sounds, like their pitch and frequencies and loudness and duration and guess what?!
.
Purring can heal people and animals just by the sound of it. I am not going to tell you about the Hertz frequency ranges that create this healing because who cares unless you do and then if you do you can research it yourself, right?
.
And I'm not just talking about cats purring either, but also cheetahs, pumas, even lions and tigers. And I think--this is just my opinion but you know I can be very smart sometimes--I think even if you purr to yourself it can help calm you down. Okay, maybe this is not as good as kicking your feet in the air and crying BOOHOOHOO from your stomach, but why not try a little purrrr here and there?
.
There is some fancy research that says that cats can sympathetically help cure illnesses in people (and I think in rabbits too) simply by being around them because the purring can lower blood pressure and eliminate headaches and even vets say "if you put a cat and a bunch of broken bones in the same room, the bones will heal."
.
So I called my Uncle Bunny who owns that pellet business in Cleveland and I told him he should talk to Uncle Kitty because maybe they could start a purrrrring business and if they did I would get a bonus for coming up with the idea and then I might even do kj's blog for $ 8 instead of $10 because I wouldn't need the extra money so much and kj and maybe other people too would think isn't that nice of me and I would like all the nice attention from it.
.
I think when you go to bed tonight you should include a purr. Maybe you have a cat or a cheetah already so that would solve that, or maybe you have a family member or friend who would purr to you but if you don't why don't you just purr to yourself and see what happens?
I am not charging for any of this advice this one time.
.
Sincerely
.
Emily Rabbit
Posted by kj at 11:03 AM