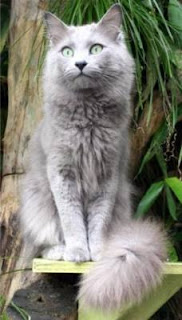 First he purred, because he knows that purring relaxes JB and for that matter mostly all humans. But then he told JB that he was very upset that area behind the Magic Cottage has become a piled mess of old leaves and broken branches. His tail got caught in a pile of twigs and he was nearly stuck there for an hour until he chewed through the top twig.

Uncle Kitty told JB that he called the Department of Public Works to file a complaint.

"She promised me jellybeans."

"She told me I should purr first and then ask for candy."