This and That This Week :^) 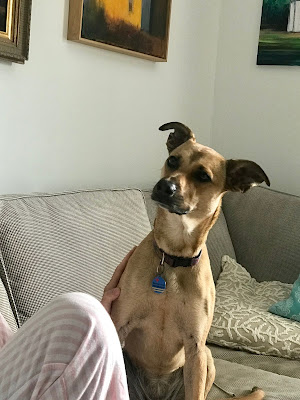 First there's Mattie. Now 2 years old, here at 8 weeks old from the streets of Aruba, as sweet as can be even while she holds tight her DNA warnings about jittery sounds and strangers who approach our house. The highlight of her day is the 2 pm arrival of Steve the Mail Person, who without fail brings her a cookie no bigger than the size of my smallest finger. But don't tell Mattie that: she squeals with pure joy when she senses Steve's approaching. And at 9 am every morning either JB or I takes her to the local dog park, where she growls and nudges and runs with both her friends and enemies. I am convinced the human species would be better off with tails and honest growls. We'd know what to expect from each other. 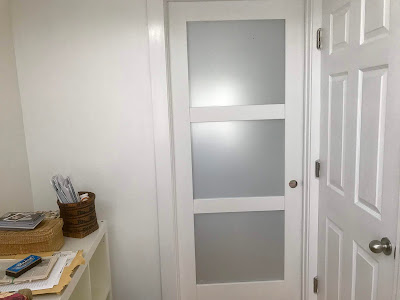 Yes this is a boring photo--a bland door. But to me it's the separation of our master bedroom and my 'office,' complete finally, with privacy for the futon that sometimes someone might be sleeping on. It's taken me a year to get this little wall built and JB isn't happy about it--she loved the expanse across the room. The compromise happens when the door stays open because we can still see the water peek of the bay a block away.

Today two heavy boxes arrived, brought by a slight man who struggled mightily to get those boxes on our porch. I felt bad for him, "They should have sent a stronger man than me," he told me, this nice man who looked like he'd just run a marathon, lugging those boxes.

Inside is an armoire for me, which our friend Raul will assemble on Friday. The armoire will go to the left of the door and I will be a happy lucky duck about it all. 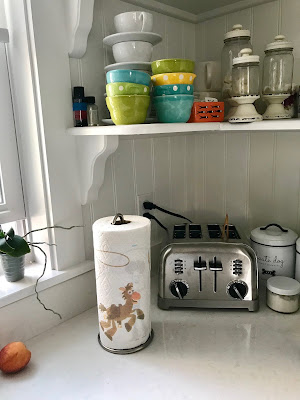 I had to buy paper towels. I went to the grocery store and picked up a six pack, a regular, plain white, simple package of paper towels. There are chuckles in the household because somehow I brought home THESE paper towels! 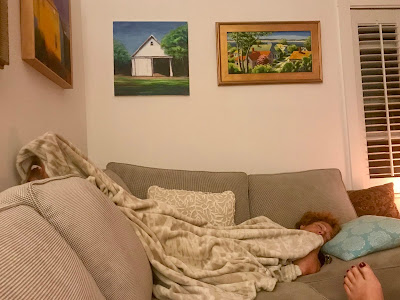 And finally, last night, after several days of fun summer company, JB and I collapsed on the couch. I don't think much more needs to be said about this photo.

It's still summer and the sun's been out all week and I'm still walking better and that's that in a nutshell.

Wishing you much love,
kj