My father planted dahlias every year. Which is to say he planted the bulbs in late Spring and dug them up in late Fall. They wintered in a paper bag down the cellar, where it was sufficiently cool for their liking but not enough to freeze them dead. Every so often they needed a little water sprinkled on them, until it was late Spring and the process began again.
.
Just before my father died, he asked me to take care of his dahlias. At the time they were in their paper bags, tucked away in my father's "room", an unheated cement cellar where he displayed on every wall all the artwork my brother and I had ever done, plus one framed love poem he wrote to my mother when he was stationed in Japan during World War II.
.
I put some effort into caring for my father's dahlias, but not enough. They shriveled first, and then they died. I've asked for forgiveness, and I'm pretty sure I've been excused for my pre-occupation with other matters. Besides, I wasn't much of a gardener at the time. I was sorry that they died, but sorry only gets you so far. They died anyway.
.
This Spring I bought four dahlia bulbs and planted them in my garden. The result has been beautiful. These are not flowers that need company. One single dahlia is knock-down gorgeous.
all by itself.
. 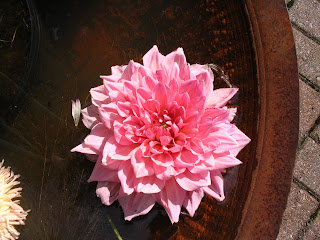 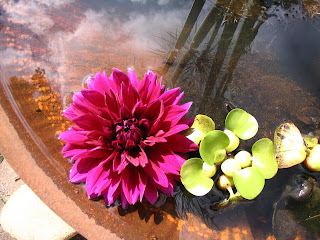 If you've noticed that these flowers do not look like they are blooming in the garden, it's because they've been cut and placed in our little water garden just outside the kitchen door.
. 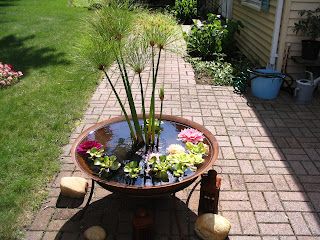 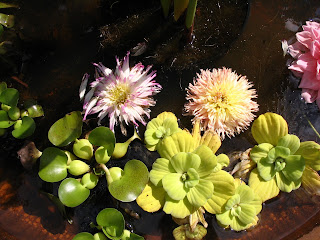 The whole thing feels calm and peaceful. And I imagine my Father looking down with approval.
.
JB and I have not tended to the yard and garden this summer. We spent four or five weekends and one long week in Provincetown and in the meantime the yard's pregnant weeds definitely gave birth. We are just pulling ourselves out.
.
Still, we've somehow managed to create a sweet place in the back yard, including JB's Magic Cottage. She just steps outside the back door and creates art.
. 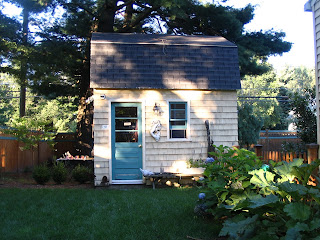 And for the first time this summer we've had friends over for dinner: shrimp, scallops, chicken and roasted vegetables all cooked on the grill, and tomatoes and basil from my garden off the driveway. 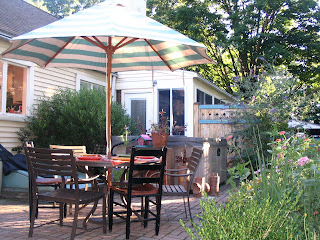 I haven't found my way to the hammock yet, but when I look up and see one of the four or five majestic trees that surround our house, the first thing I feel is appreciation. Then I think of my friend Ces, often wishing she could see this or that tree for herself. 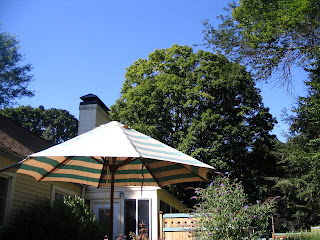 And whenever I walk around my yard, and marvel at the flowers and shrubs and flowering trees JB and have planted in the three seasons we've been here, I think of my Dad. Even though I killed his dahlias, I'm pretty sure he's helping me out anyway.
Posted by kj at 8:34 PM